From GéoFrance 3D to the start of the RGF programme

With the completion of the 1:50,000 scale geological map programme, BRGM had one of the most advanced tools and repositories of geological information in the world. However, changing socio-economic needs and evolving technology mean that new products and services needed to be developed. Consequently, BRGM began gradually implementing the French Geological Reference Platform (RGF) in 2011. 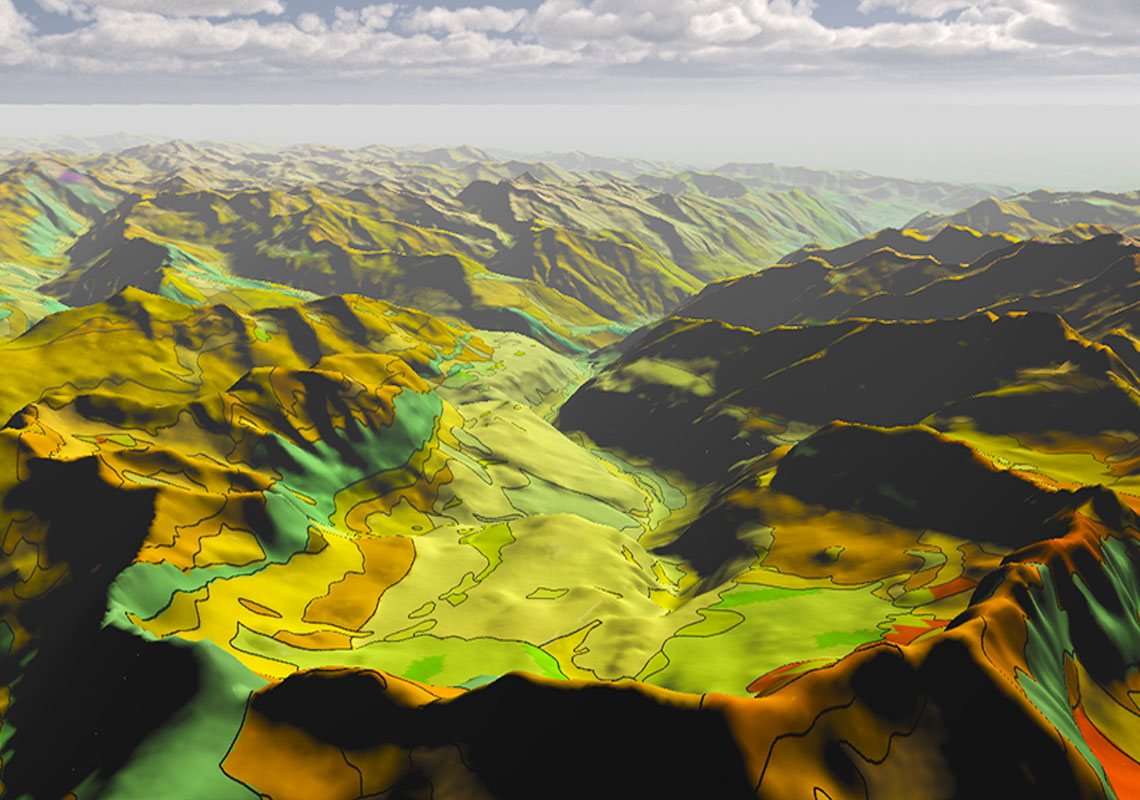 Extract from the RGF geological map of the Pyrenees at a scale of 1:50,000 draped over a digital elevation model (Pyrenees, 2015). © BRGM

In 1982, BRGM undertook the Deep Geology of France (GPF) programme, which was replaced by the GéoFrance 3D programme in 1995. GéoFrance 3D aimed to provide a three-dimensional image of France’s subsurface. Drawing on a wealth of geophysical data, the programme helped obtain new data on France’s subsurface without the need for costly drilling operations. It was completed in 2000.

During the 2000s, BRGM introduced a tool to disseminate geological information. This provided access to an on-line geological map to the scale of 1:50,000, which included 1,060 maps covering the entire French territory. However, evolving needs in terms of geoscience applications required the development of new tools that could integrate and exploit the considerable amount of information we had on the subsurface, which one map could not do.

In 2011, BRGM and its academic partners thus set up the French Geological Reference Platform (RGF) programme. This programme collects and combines in a 3D database all available information on the surface and subsurface – down to several kilometres below the ground – in the light of new scientific interpretation. Its aim is to provide a new geological map of France reflecting rock properties.

With the RGF, BRGM’s ambition is to move away from 2D scientific information and to promote 3D mapping of French geological structures instead, while adding time as a fourth dimension.

The Pyrenees as the first RGF project

In 2013, BRGM introduced a 3D-demonstrator for the Vosges and Upper Rhine Plain – the first in a series of projects. The purpose of the demonstrator was to develop a consistent methodology for this new scientific programme, which BRGM intended to deploy across the whole of France.

The first proper RGF project was implemented in the Pyrenees. For 6 years, the project explored the mountain chain’s geological history spanning 600 million years. Because of their many scientific and societal challenges, the Pyrenean range and foothills were selected to be the first area where BRGM applied the concepts of the RGF programme. 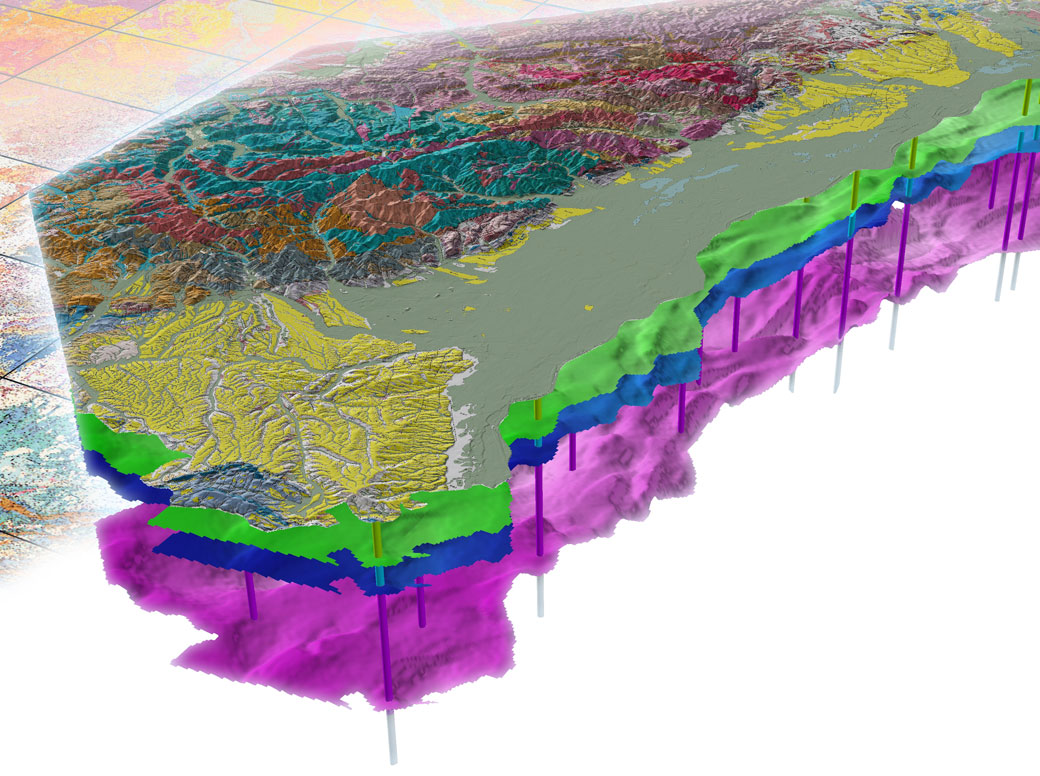 3D-view of the south-west of the Alsace Plain and the Vosges range as part of the Vosges-Upper Rhine Plain demonstrator for the French Geological Reference Platform (Alsace, France, 2013).
© BRGM - D. Rambourg

The work helped build uninterrupted, homogeneous and consistent geological knowledge of the Pyrenees, producing a single map of the range to the scale of 1:50,000, which is available on the Infoterre website. Other studies conducted as part of the RGF programme included a very promising 3D-simulation of a hydrogeological system. This was used to understand the processes by which thermal springs in the Têt valley reach the surface. By modelling all the faults that cut through the ancient Variscan terrains of the Canigou Massif as well as rock permeability and thermal properties, teams from the University of Montpelier and BRGM developed a model that accurately predicted the patterns of ascent to the surface of thermal springs, since confirmed by field observations. This significant result paved the way for developing more predictive models and makes geothermal exploration easier.

Two other RGF projects have since been undertaken, following the Pyrenean one. One of them focuses on the Alps and the peripheral basins of the Alps, and the other one on the Paris Basin. 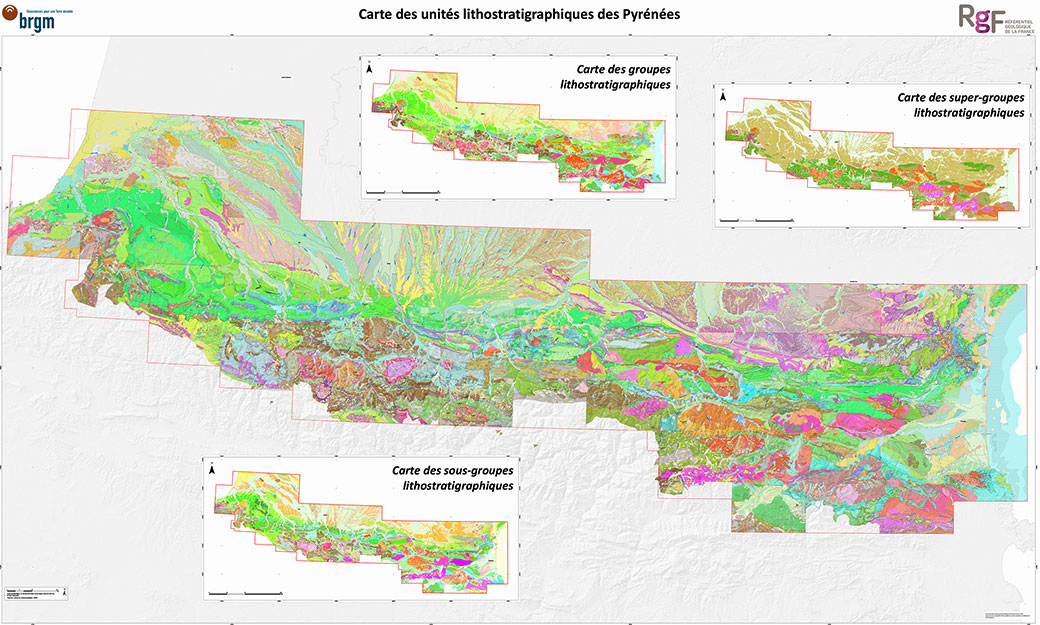 Unified map of the lithostratigraphic units of the Pyrenees at a scale of 1: 50,000.
© BRGM
Back to the chapter