Underneath our feet lies an abundant and almost inexhaustible source of energy. Extracting the energy locked inside fairly impermeable rocks is a challenge, but is not impossible. In 1987, as part of a joint French-British-German effort, BRGM’s geothermal experts took part in a large European research programme with the aim of capturing the heat stored in deep rocks. The programme took place in Soultz-sous-Forêts in northern Alsace and lasted for more than twenty years.

The heat naturally occurring a few kilometres below the Earth’s surface constitutes an abundant and almost inexhaustible source of energy the use of which would generate neither waste nor greenhouse gases. Unfortunately, this resource is largely stored in rock formations that are not very permeable and is thus difficult to extract. This led to the idea of improving subsurface permeability by using hydraulic fracturing. Enhanced geothermal systems (EGS) are based on this concept, which is simple in principle but which is difficult and costly to implement. There have been several attempts around the world to develop this technique. The most advanced experiment began in 1987 in France as part of a joint French-British-German effort supported by the European Union and ADEME.

Soultz-sous-Forêts, a commune in the département of Bas-Rhin on the western side of the Upper Rhine Plain about 50 km north of Strasbourg was an excellent choice for this research. The granite there is naturally fractured and has a high geothermal gradient as shown by prospecting work carried out in the previous century around the Péchelbronn oil field.

Two deep wells were dug 450 m apart to depths of 3,600 m and 3,800 m respectively, as well as five geophysical observation wells ranging in depth from 1,400 m to 2,200 m. In 1997, after ten years of testing and borehole surveys, a loop of circulating water was established for four months between the two deep boreholes, reaching a flow rate of 25 kg/s and temperatures above 140°C, with no corrosion effect observed, and using minimal pumping capacity.

Following this world first, the programme was continued by a group of industrial companies in which EDF and its subsidiary Electricité de Strasbourg played a major role. A scientific pilot study was conducted with three 5,000 m deep boreholes and a 1 MW dual-fluid power plant was commissioned in 2006.

Several teams of scientists from France (BRGM, CNRS, and various universities) but also from Germany, Switzerland and the UK joined forces under the European Hot Dry Rock Association (EHDRA) to participate in this work. This pilot project requires major collaborative research investment whose economic viability is inevitably for the longer term. 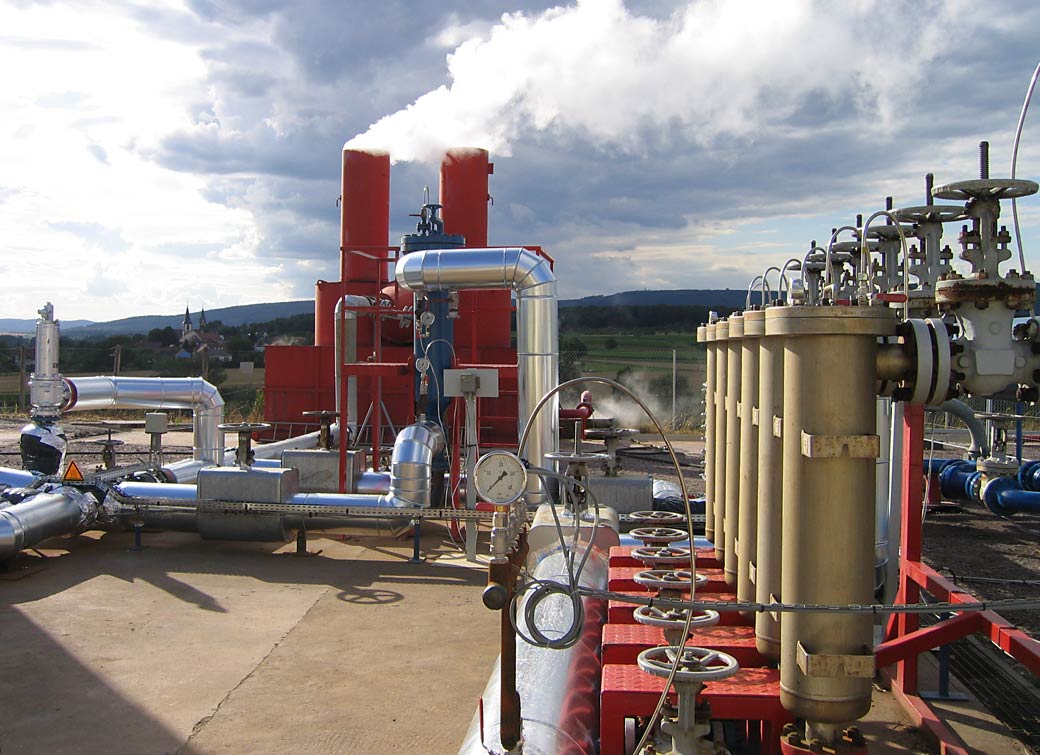 View of a steam plume at the Soultz-sous-Forêts site during the 2005 hydraulic circulation tests.
© BRGM
Back to the chapter